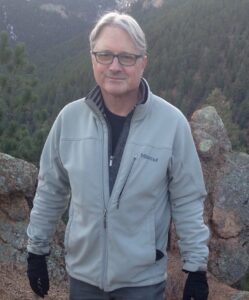 Alan Richardson began his practice of Zen Buddhism in 1973 when he spent a year sitting at the San Francisco Zen Center. In 2007, he joined Boundless Way Zen and has since held a number of service and leadership positions, including serving both as Tenzo and Tanto at sesshin, as Practice Leader of the Henry David Thoreau sangha, and (twice) as President of the Boundless Way Zen Leadership Council. In 2021 he received Dharma Entrustment (the lay equivalent to Denkai) from his primary teacher, David Rynick, Roshi, becoming a Dharma Holder in the Boundless Way Zen tradition. Alan has taught English literature for many years at Boston College, with a specialty in poetry. He is the author of numerous academic studies and, most recently, Breakfast with Salamanders: Seasons on the Appalachian Trail, a book that of treats of walking, nature, Zen, and section-hiking the “AT.”

Pierce Butler is an emeritus professor of English at Bentley University where he taught English literature and writing for 32 years, including a signature course entitled Literature of the Spiritual Journey. A member of the Spiritual Life Committee at Bentley, he also facilitated a Zen group for students and faculty. He’s been a student of Zen for more than 25 years, and is a Practice Leader and Assistant Teacher in the Boundless Way community. He studied the work of G. I. Gurdjieff for many years in a 4th Way community in Massachusetts, and he is the author of A Child of the Sun, a historical novel about Katherine Mansfield’s sojourn at the Gurdjieff Institute. He also leads prison sanghas at Northeast Correctional Center and MCI Concord.

Melissa Myozen Blacker, Roshi is Abbot of Boundless Way Zen, a Soto Zen priest, and a Dharma heir to James Myoun Ford, Roshi in two lineages: an ordained Soto transmission through Jiyu Kennett, Roshi and a lay koan-teaching lineage through John Tarrant, Roshi. Melissa is a resident teacher at Boundless Way Temple in Worcester, MA.  She holds degrees in anthropology, music and counseling psychology and has a private practice in contemplative counseling.  From 1992 to 2012 she was a teacher and director of programs at the Center for Mindfulness, founded by Jon Kabat-Zinn. With her husband, David Dae An Rynick, Roshi, she teaches silent mindfulness retreats throughout the United States, Europe, Canada and Central America.  Her writing appears in a number of collections including Best Buddhist Writing, 2012, and The Hidden Lamp, and she is co-editor of The Book of Mu:  Essential Writings on Zen’s Most Important Koan. Her writing also appears in various Buddhist magazines, including Shambhala Sun, Lion’s Roar and Buddhadharma.

David Dae An Rynick, Roshi is a Soto Zen priest and is the abbot and a resident teacher at Boundless Way Temple in Worcester, Massachusetts. He received Dharma transmission in both the Korean Rinzai lineage through Zen Master George Bowman and in the Japanese Soto lineage through James Ford, Roshi. He is a member of the American Zen Teachers Association, and the author of This Truth Never Fails: A Memoir in Four Seasons. David is also a life and leadership coach who works with spiritual leaders from many different traditions as well as with individuals seeking to align their lives with their deepest wisdom.  More information and his blog can be found at www.davidrynick.com.

Robert “Bob” Ryudo Tetsumu Waldinger, Sensei, received full dharma transmission from Melissa Myozen Blacker, Roshi, in two lineages: an ordained Soto transmission through Jiyu Kennett and a lay koan-teaching lineage through John Tarrant. Bob is also a senior Soto Zen priest (Osho). He is a psychiatrist and psychotherapist who teaches at Massachusetts General Hospital. He also directs the 80-year-long Harvard Study of Adult Development, the longest study of adult life ever done (“What Makes a Good Life?”). Bob is the resident teacher of the Henry David Thoreau Sangha in Newton, MA. He lives in Newton with his wife Jennifer and is the father of two adult sons.

Michael Shoryu Fieleke, Sensei is a Boundless Way Zen Guiding Teacher, Soto Zen priest, and resident teacher of Morning Star Sangha. Mike is a fully transmitted Dharma heir of David Rynick, Roshi in three lineages: an ordained Soto tradition, the Harada-Yasutani koan school (both through James Ford, Roshi), and the Korean Seon tradition (through Zen Master George Bowman).  Mike is a full member of the American Zen Teachers Association. Mike also interned in teaching Mindfulness-based Stress Reduction, has a Ph.D. in Education, and is a high school English teacher.  His blog can be found here.

James Myo’un Ford, Roshi is a Soto Zen priest and a Boundless Way Zen Guiding Teacher Emeritus. He is currently senior priest and teacher for Empty Moon Zen Network which has locations in Anaheim, CA, Seattle, WA, and Northumberland, PA.  James received Dharma transmission from Jiyu Kennett, Roshi and was authorized to teach by John Tarrant, Roshi.  In 2005 John Tarrant gave James Inka Shomei, acknowledging him as a Dharma heir in the Harada-Yasutani Zen lineage. He is the author of This Very Moment: A Brief Introduction to Buddhism and Zen for Unitarian Universalists. He is also the author of a study of Zen teachers and communities in North America, Zen Master Who? A Guide to the People and Stories of Zen, the co-editor of The Book of Mu: Essential Writings on Zen’s Most Important Koan, and the author of If You’re Lucky, Your Heart Will Break: Field Notes from a Zen Life from Wisdom Publications.